Wed: 9:00 AM (Adoration with Exposition following Mass until 9 pm) (2nd Wednesday of the even months Mass will be at Green Acres at 10 AM and on the odd months at Mission Point Greenville at 10 AM)

Thurs: 9:00 AM (2nd Thursday of the month Mass will be held at Mission Point Belding at 10 AM) 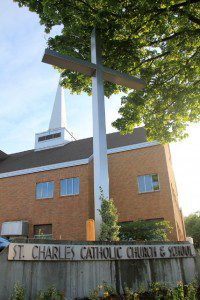 The first mass in Greenville was celebrated in 1859 when Father Henry Rievers from Parnell gathered five families in the home of Patrick and Anna McDonald located at the southwest    corner of Benton and Webster Streets.

In 1875, Father Charles Bolte of Ionia purchased property on Maple Street and started a church under the patronage of St. Charles Borromeo.  The first mass was celebrated on September 12, 1875.

In 1912 the parish purchased the Slaght home and 2/3 of the surrounding block on Franklin Street bordered by Oak Street. By 1913, the parish tore down the church on Maple Street and used the materials to build a basement church facing Benton Street which is now the current site of the activities building.  It wasn’t until January of 1914 that 33 families welcomed Father Bolte as resident pastor, a role he held until 1918.

To meet the needs of a growing parish in 1934, Father William Flannery supervised the     building of a new mission style church on the corner of Franklin and Oak Streets. This building was expanded and modernized in 1976. In 1994, lightening struck the church  and burned it to the ground. After two and a half years of planning and construction, the current church building was dedicated on March 16, 1997.

In 2012, the parish clustered with St. Joseph-St. Mary parish in Belding. 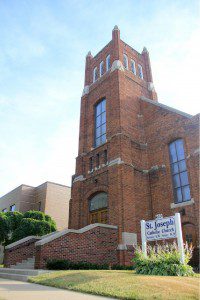 St. Joseph Catholic Church was established in 1891 in the village of Belding as a mission of   St. Mary. The original church was built in 1894 on the corner of Bridge Street and M-44.

In 1913, St. Joseph was given full parish status and Father John Zindler, who was serving as pastor of St. Mary, was appointed pastor.

The current church building, at the corner of Liberty and Bridge Street was dedicated under Father Joseph Maier in 1922.

The summer of 1946 brought change to St. Joseph and St Mary.  Father Charles Steves, who would remain the priest of St. Joseph and St. Mary for 25 years, was appointed pastor of both parishes.

Father Steves successfully opened St. Joseph Catholic School in August of 1957.  The school was successful for 49 years before closing in 2006.

With the implementation of the diocese’s Our Faith, Our Future Plan, St. Joseph merged with St. Mary and the new parish of St. Joseph-St Mary was formed and clustered with St. Charles Borromeo in Greenville in 2012. 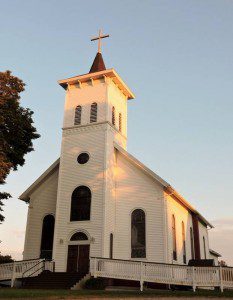 St. Mary Catholic Church is a small country church located south of Belding in the area known as Miriam.  The property for the church was given to Bishop LeFevere of the Diocese of Detroit in 1860.

The present church was built by parishioners in 1871 under the direction of Father Charles Bolte who was pastor at SS Peter and Paul in Ionia. The flagship piece of the new church was the 103 foot steeple. The first resident priest was Father Andrew Leightner and in 1913 the church became a mission parish of St. Joseph in Belding.

St. Mary and St. Joseph began sharing a priest with the arrival of Father Charles Steves in 1946 who remained the priest of both parishes for 25 years.

In 2012, the parish merged with St. Joseph in Belding  and the new parish of St. Joseph-St. Mary clustered with St. Charles Borromeo in Greenville.

Wed: 9:00 AM (Adoration with Exposition following Mass until 9 pm) (2nd Wednesday of the even months Mass will be at Green Acres at 10 AM and on the odd months at Mission Point Greenville at 10 AM)

Thurs: 9:00 AM (2nd Thursday of the month Mass will be held at Mission Point Belding at 10 AM)